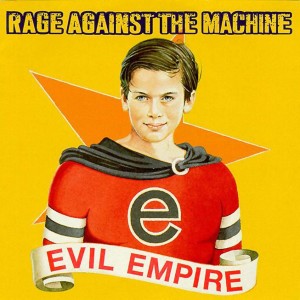 Evil Empire – Rage Against The Machine

Song Number 2 on the album: Bulls On Parade

This is a heavy song, so please turn up the volume to its highest setting. Monk Protesting the Murder of Monks

Weapons not food, not homes, not shoes
Not need, just feed the war cannibal animal
I walk tha corner to tha rubble that used to be a library
Line up to tha mind cemetary now
What we don’t know keeps tha contracts alive an movin’ Rage Against The Machine

What does Bulls On Parade mean?

The lyrics make it clear that the song is about the United States’ war industry/business.  So when the singer, Zack De La Rocha, says, “Bulls on parade” he can be referring to the the stock market being a bull market.  In United States history war has always helped boost the economy.  “Bulls on parade” can also refer to the Republican party.  The Republican party is represented by an elephant, a male elephant is also called a bull elephant. Republican’s have the tendency to lean towards war as a resolution to conflict.

Rebuttal: is a noun. It is a contradicting argument.
Slander: used as a verb means to say false statements that damage someone’s reputation.
Referred: is the past tense of the verb to refer. It means to make referance to something or someone.
Shattering: comes from the verb to shatter meaning to break, or cause to break violently into many pieces.
Rotten: is an adjective meaning to be decayed or deteriorated due to time.
Sore: used as a noun is an open skin infection.
Rally: is a verb meaning to congregate or unite in support of a cause.
Shells: is used as a noun here and it refers to a bullet casing (the outside cover of a bullet).
Rubble: is a noun. It is pieces of rock left on the ground. Often referring to a place where a building was destroyed, the remnants are usually small, broken rocks; rubble.
Boost: is used as a transitive verb meaning to stimulate.