One does not associate Colombia with Basketball, but I love it and believe it or not there is a basketball culture here. In this blog post I will be recounting my experience playing Basketball in Medellin, Colombia.

But first…since this is my blog, let me express how much I FUCKIN’ LOVE basketball…

A kidney stone being forced through your urinary tract, slowly and painfully is a good analogy for how much I feel for basketball. Alright that’s an exaggeration, but, yeah, aside from running my business it’s the thing I do the most in life.

My family immigrated to the United States in 1985 from Colombia, I was four years old. I asked my father why we left Colombia, he told me that it was because Colombia was at war with itself. There were car bombs, shootouts, and innocent people were being killed regularly. My parents wanted a better life for us, and they found it in Southern California.

The city we lived in when I was a kid was Anaheim (where Disneyland is located). I grew up playing many sports. The first sport I played, naturally, was soccer. I say naturally because I’m Colombian and that was my dad’s sport. He’s 56 now and still plays.

In an attempt to assimilate to U.S. culture my dad signed me up  for little league. I was a natural. I fell in love with the sport and practiced whenever I got the chance. Our team, the Blue Jays, was terrible, we finished in last place. Regardless, it was my introduction to organized sport and it was when I realized that I really hated losing. My first Little League team was absolutely horrible, but I fell in love with baseball.

Once baseball season was over my dad signed me up for AYSO in 1990. I landed on a team called the Jet Blasters. I was the goalkeeper (to this day I’m a goalkeeper.) Opposite of my experience on the Blue Jays we were really good. We finished the season undefeated and got a first place trophy. Our Brazilian coach, Aldo, taught us that winning should be expected and that we should never gloat or belittle our less fortunate opponents. I remember the first time I watched a professional basketball game on television. It was December 12, 1988, Los Angeles Lakers vs Philadelphia Seventy Sixers. I was about seven years old and as I sat on the couch watching the game with my Gringo, ex-military, postal worker uncle William Custard, I was in awe. Magic Johnson became my hero with his ball handling and passing ability. To this day I am a ride or die Laker fan.

Likewise, I remember the first time I played basketball. I was in the third grade at Stoddard Elementary School in Anaheim. Although at that age we played basketball with no rules just throwing the ball around and roughhousing, I remember feeling like this was my sport. I started to play organized basketball in 1993 when I was 13 years old. I was tall and was developing a pretty good shot. My parents bought me a basketball hoop and we put it up in our drive way. I played every single day, either with friends or by my self. It got so bad that my mom had to take it down, so that I would do my homework.

Although my team was terrible that year I made the all-star team and I was able to experience playing with really good players. The ensuing year was my freshman year of high school. Making the Capo Valley basketball team was a dream that seemed almost out of reach. I knew there were a lot of kids that had been playing ball for longer than I had…I was feeling insecure to say the least.

Basketball tryouts came in October and I showed up ready to give it my all. I had been playing basketball and soccer all summer long, so I was in pretty good shape. I remember having hit a few jumpers and making a few fast break layups. Overall I did well. The list of names wasn’t going to be posted for another week. It was one of the longest weeks in my teenage life.

The day came that the names were posted on the bulletin board at the gym. I ran over and scrolled down the list and saw my name. I had made the A team. I sat down on the curb with the best feeling I had ever felt.

Fast-forward to 2011 to Colombia

I came to Colombia in 2010. I was discovering my roots, traveling around, working online as a freelancer and not really missing basketball much.

By 2011 the itch to play basketball came about. I had become friends with Joel Duncan and Dwayne Golden (Dwayne from the US and Joel from Canada) who would go to the basketball court in Manila to play 1 on 1. I joined them as did a few other foreigners.

A Facebook group called the Medellin Basketball Association was created in order to organize pick up games. Word caught wind and all of a sudden there were more than 100 members in the group.

Today the Medellin Basketball Association has over 600 members and we play every Monday and Wednesday at 6:00 pm at La Unidad Deportiva De Belen. It’s covered so we play whether it rains or not. We also play on Saturdays at 4:00 pm at the Manila court in El Poblado. It’s always a very good mix of Colombians and foreigners. I’ve become friends with everyone that plays. It’s awesome.

I am a competitive person, therefore, I had to join a team here and play in tournaments. The first team I joined was the Envigado Warriors. We played in 2 tournaments and it was very fun. The first thing I learned from playing in a Colombian basketball league is that the fact that having played basketball in the US makes me a lot more physical than most Colombian players. I use this to my advantage. I play on the UPB Alumni team. Although I’m not a UPB graduate I’m able to play on their team through a technicality. I really love playing on this team and I’ve become good friends with all my teammates.

Last year was our first year in the tournament, we finished in 3rd place. This year we have a good chance of winning the tournament. The basketball club Eagles is pretty well known in the city. I was honored to play with them in an international tournament for men over 35 called Maxi. We came in 2nd place losing to Puerto Rico in the final. It was very fun! 2nd Place in an International Tournament for Men over 35.

I’m 36 and I Play Basketball in Medellin

Since I’m getting older my knees started to get sore. I figured it was because I was heavy (fat!), therefore, I started a no sugar and no processed carb diet in January 2017. It’s been over 6 months and I lost 15 kilos that’s over 30 pounds. Now I’m at my ideal weight of 89 kilos.

A few friends and I also started a challenge, 100 days of 100 push-ups and sit-ups as soon as we wake up. We have to send the video of our last set via WhatsApp in order to prove that we met our challenge that morning.

I also joined a new gym this year, Smart Fit. It’s great. Only $70,000 COL and I’m able to go to any Smart Fit gym in South America! The owner, Stephan is an amazing entrepreneur and over-all great person. I highly recommend the gym. Do You Want To Play Basketball in Medellin?

If you’d like to play basketball in Medellin, feel free to join our group on facebook, the Medellin Basketball Association. It’s a great way to meet people and make friends. Male or female, it doesn’t matter, we play with everyone. Just know that the level of competition is intermediate to high. It doesn’t mean that you have to be a great player, you just have to come out and try hard, even if it’s for one game.

The altitude kills newcomers to the city. But once your body gets acclimated you’ll be fine.

If you’d like to play on a team here in Medellin all you have to do is come play with us and ask around. Most of the Colombian’s that play with us are on teams and someone will hook you up.

Hope to see you on the court!

Where to Buy Basketball Shoes in Medellin?

You can get legit, original shoes at any mall in Medellin. They can get quite expensive though. If you want to go the knock-off rout, you can find plenty of knock-offs in downtown near el hueco.

If you’re a size 11 or under you’ll find shoes pretty easily here. But if you’re like me and are a size 13 it’s pretty tough. I’ve only found a couple stores in Medellin that carry a size 13 (47.5 cm).

Centro Comercial el Diamante – This place is near the stadium and will carry bigger sizes.

Orbitz in the Hollywood building downtown – There’s a pretty big building called Hollywood in downtown. In there you can ask for a store called Orbitz. People might not know it by name, so just ask for the store that sells big sized shoes. 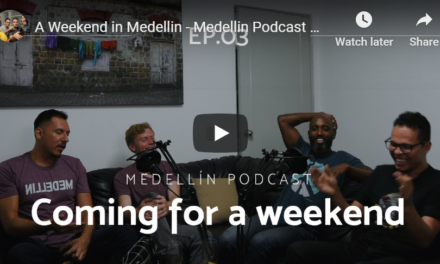