Mission: Experience Downtown Medellin in Half a Day

“Your mission, should you wish to accept it, is simple. You have half a day to experience downtown Medellín. Amongst other things, to visit those places you have only Googled previously in anticipation, to see first-hand the world-famous Botero statues in all their glorious voluptuousness, to gorge yourself on the national feast that is the Bandeja Paisa, and to interact with the local inhabitants in such a way as to ingratiate yourself to them in a memorable way (and not embarrass your country of birth in the process). This article will self-destruct in five seconds, probably taking your smartphone, tablet or computer with it. Good luck, Andrew. ¡Buena suerte!” Agent for this Mission: Andrew Macia

My name is Andrew Macia, and I’ve been living in Medellin for 6 years now. The other day, my friend and I were talking and he asked me the question, “If you had just half a day to experience downtown Medellin, what would you do?”

Of course, I balked at first. I said that it would be impossible, that there’s too much to do… I mean, it would also depend on the day, and how much drinking would be involved the night before (it sucks to go do touristy things when hung over.) I thought about the question the next day, and I decided that it would be the premise for a great blog post and podcast (podcast coming soon). So I’ve put time into answering the question and I have come up with what I would do if I had only half a day to experience downtown Medellin.

Disclaimer: I have absolutely no idea of what “floats your boat,” eg, entertains you, gratifies you, or tickles your intellectual bone, etc. This is what I, Andrew Macia, would do to feel like I’ve really witnessed the downtown heart of this city.

The sights, the sounds, the souvenirs, the food, the street performers, etc. of downtown Medellin are something you don’t want to miss.

I’d start off by having a light breakfast, probably fruit or oatmeal and coffee, then I’d walk to the nearest Metro station. At the Metro, I’d get off at the San Antonio Station. This is the heart of of downtown Medellin, and, for me, it’s one of the best places to visit because you really get a feel for the city and the people who live here. Let me explain.

Upon getting off at the Metro station, I would walk towards El Hueco and just wander. El Hueco (the hole) is where you can find pretty much anything for sale, mostly clothes and shoes, but what I love about it is the amount of people bustling through. Medellin is known as the garment capital in Colombia. In El Hueco, you’ll find cheap clothes (many of which are knock-offs), but nonetheless interesting.

TIP: Jeans are of great quality. So if you need ‘em, this would be the place to go shopping – shoes on the other hand are of terrible quality, mostly knock-offs and still not worth the cheaper price. I remember my first time in el hueco…I bought a Raiders hat. lol Here’s the Google Map of the walk between the San Antonio Metro Station and El Hueco:

After wandering around El Hueco for a bit I’d head over to Carabobo street, which is a pedestrian only street that spans all the way down to Plaza Botero.

The walk from El Hueco to Plaza Botero down Carabobo street is awesome. It’s packed with people, stores, vendors and the occasional street performer. As you walk, you’ll see many bakeries and you’ll be tempted to buy something to snack on. If you see a spot selling buñuelos, give it a go, they’re basically balls of dough and cheese that have been deep-fried. Yum! Haha. Empanadas, pasteles de pollo, and palitos de queso are also great.

History of name Carabobo: The Battle of Carabobo in Venezuela (June 24, 1821) was the decisive battle against the Spanish royal army which lead to the independence of Venezuela. For those of you that don’t know, Venezuela, along with Colombia, Ecuador, Panama and Peru, were once one country called Gran Colombia and ruled by Simon Bolivar.

The revolutionary war and civil war history of each region is pretty amazing.

You’ll soon get to the famous Plaza Botero and there you can wander around looking at the curvaceous sculptures by master sculptor Fernando Botero. Here’s the Google Map of the walk from El Hueco to Plaza Botero via Carabobo street (Carrera 53):

At Plaza Botero, you’ll see two distinct buildings, the most noticeable being Rafael Uribe Uribe Palace of Culture (in Spanish, it’s called El Palacio de la Cultura Rafael Uribe Uribe.) The history of the building is pretty cool. It was designed by Belgian architect Agustín Goovaerts in a Gothic Revival-style and construction was never actually finished. It’s a public building and you can go in and tour it. You might get lucky and get a tour guide that speaks English to tell you the history as they show you around. It’s a big place with 3 floors, including an awesome little theater in the dome.

The second building of note in Plaza Botero is the Museum of Antioquia (Museo de Antioquia), which houses art from our friend Fernando Botero and also Pedro Nel Gómez. You have to pay to get in, but it’s well worth it. Again, this is a large place and can take you some time to get through it all, and, again, if you’re lucky, you can get an English-speaking tour guide.

Security Tip: During the day, downtown is relatively safe. Avoid taking out your cell phone at the Parque Berrio station, it’s notorious for muggers. There are police all over downtown, make sure you spot them (they’re in green), so if anything happens all you have to do is give a shout. Auxilio means help in Spanish. “Auxilio Policia!” would be what you’d need to shout.

Let’s continue on our downtown mission… 3. Plaza Botero to Hacienda or Versailles via Junin Street

From Plaza Botero, I would walk to Junin street (Carrera 49). Like Carabobo, Junin street is a pedestrian street with shops, mini-commercial centers, street performers, street vendors, restaurants, and souvenir stores.

Importance of the name Junin: The battle of Junin (August 6, 1824) was one of the last battles led by Simon Bolivar in the independence of Peru. Furthermore, in Colombia, there’s a municipality some 100 kilometers from Bogota called Junin.

Walking up Junin towards Parque Bolivar, you’ll find Restaurante Hacienda. Hacienda has been around since 1991 and is very well-known throughout the city. I’d have lunch here and I’d order the Bandeja Paisa.  The Bandeja Paisa is considered Colombia’s national dish, so it’s a must try. It’s a giant dish so make sure you’re hungry.

If you’re not ready for lunch yet, you can stop by Restaurante Versailles, which is right there across the street from Restaurante Hacienda on Junin street. Versailles is an Argentinian-owned restaurant that opened in 1961. It is famous for it’s Argentinian-style empanadas (which are baked instead of deep-fried like the Colombian empanadas.) They open early, so if you want to do the downtown mission backwards, you can start by arriving right to Versailles first thing in the morning, having breakfast and heading towards Plaza Botero.

This is the Google Map of the walk from Plaza Botero to Restaurante Hacienda on Junin Street (Carrera 49):

You really don’t need a tour guide for all this… After eating lunch at Hacienda, I’d check out Parque Bolivar. Inaugurated in 1892 and named in honor of the great revolutionary war hero Simón Bolívar, the park spans two blocks. It is an emblematic spot in the city for it’s historical and cultural symbolism.

At the far end of the park, you’ll find the principal church of the Roman Catholic Archdiocese of Medellin called Metropolitan Cathedral of Medellín (and officially in Spanish: Catedral Basílica Metropolitana de la Inmaculada Concepción de María.) It is the headquarters of the “Cathedral Parish” and in 1948, Pope Pius XII granted the temple the liturgical title of Minor Basilica by papal brief on June 12 of that year.

So, yeah, even if you’re not religious it’s pretty cool to understand that it’s very important since most of Colombia is catholic. I mean, I’m not religious at all, but I love history and great art and cultural stuff, so going to old churches like this, for me, is fun.

After hanging out in Parque Bolivar, I’d walk back down Junin to Parque Berrio. There, you can grab the Metro back home.

Safety Tip: Like I said before, Parque Berrio is notorious for muggings, even in broad daylight. I’ve lived in Medellin six years and have been to Parque Berrio numerous times, and I’ve never been mugged or pickpocketed. However, I do know people that have had the bad luck of being a victim. So make sure you’re not “dando papaya” (making yourself an easy target.)

This is the Google Map from Restaurante Hacienda on Junin street to Parque Berrio:

Andrew Macia and Francisco Macia looking cool (goofy) on the Metro in Medellin.

Whether you live in Medellin or are just visiting for a few days, a trip downtown is an essential part of experiencing what the city has to offer. I love downtown so much that I actually lived there for a year and a half. From those Botero statues to a hearty meal of Bandeja Paisa to simply wandering aimlessly (but carefully) around the streets of downtown, you’ll really get a feel for the Paisa way of doing things, even if it’s just taking a timeout in a little café drinking tinto and watching the world go by.

Like I said, the experiences described above would tick my boxes, but we’re all made from different stuff. So what would you say would be your highlight of half a day in downtown Medellín? What would you do above anything else? Let us know in the following mission debriefing session (please leave a comment, in other words). 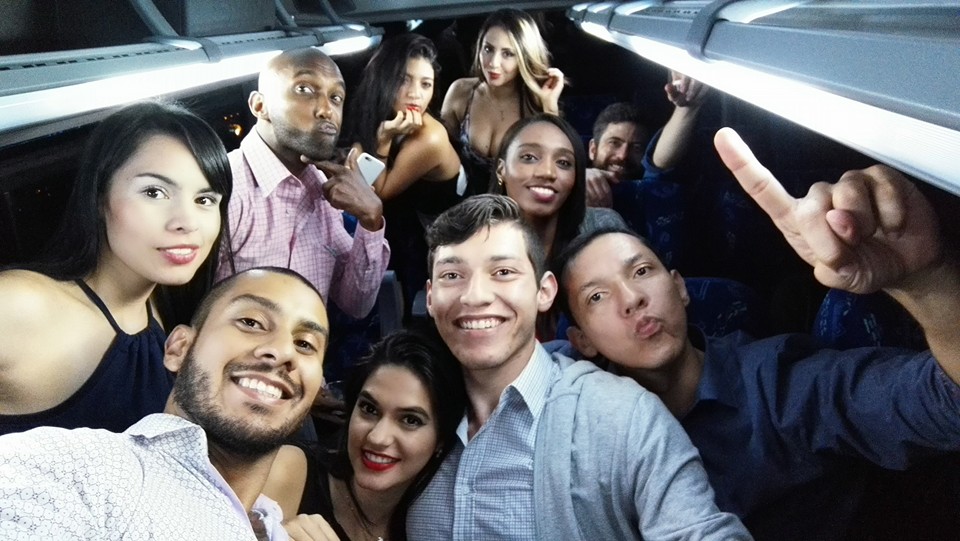