Most of you know that before starting my digital marketing agency, Red Door Studios, I taught English here in Medellin.  In the four years of my teaching career in Medellin, I had some really bright students.  Although most of my students were educated and well informed it never ceased to amaze me how almost no one knew what holiday the country was celebrating.

Colombia has quite a few holidays, so every time we had a day off I would ask students if they knew what we were celebrating, and usually, 90% of the class did not know what holiday it was, or the history behind it.

Today is Monday, November 11, 2019, and it’s a national holiday here in Colombia.  This holiday is a very important holiday because it commemorates Cartagena’s declaration of independence from Spain on November 11, 1811.

Thanks to my father, who would make me study Colombian history as a child, I knew a bit about about Colombia’s revolutionary history. In order to better understand Cartagena’s independence, I researched its history.

It is estimated that around 4,000 BC Cartagena and its surrounding areas were inhabited by various native people. Cartagena is the site for the America’s oldest ceramic artifacts ever found. 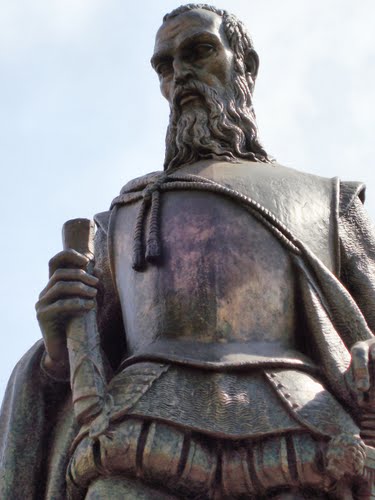 On June 1, 1533, Cartagena de Indias was founded by Spanish commander Pedro de Heredia, in the former location of the indigenous Caribbean Calamarí village. The town was named after Cartagena, Spain, where most of Heredia’s sailors had resided.

The city began with 200 people in 1533. During the remainder of the 16th century, there was rapid growth. A major factor was the gold in the tombs of the Sinú Culture.

After those tombs were completely plundered, the inhabitants began to scatter to the countryside and to establish themselves as farmers, and the population of the city decreased.

There were almost three centuries between Cartagena’s colonization in 1533 and its independence in 1811.  During that time Cartagena underwent many attacks by pirates and Spanish crown enemies, thus the creation of the walls surrounding the city.

Cartagena was ruled by Spain for over 297 years. On November 11, 1811, in the early morning hours, a crowd led by German Gutiérrez de Piñeres gathered in the neighborhood of Getsemani to await the government’s decision on Cartagena’s declaration of independence. After a long wait, the news came that the decision would be postponed. The crowd turned into an angry mob, they marched to the Palacio de Gobierno, they took weapons from the Sala de Armas and pressured for the signing of the declaration of independence.

Though Cartagena was declared independent of the Spanish crown, it took 10 years to establish complete emancipation.

On August 20, 1815, Spanish navy general Pablo Morillo arrived at the Cartagena coast with his boat fleet. Knowing that Cartagena was heavily fortified, he pulled a brilliant maneuver.  He positioned his boats strategically along the Cartagena coastline imposing a blockade.  He did not allow any food, or products to come in or out of Cartagena. The Cartagena patriots barricaded themselves within the city walls and waited.

After three months and 300 deaths from starvation and disease, some of the Cartagena patriots fled, some stayed to fight. On August 20, 1815, Morillo and his men came into the city, murdered more than 6,000 people, and took over the city. It was not until June 24, 1821, when Colombian patriot general Jose Padilla broke the Spanish lines of communication and attacked the sleeping Spanish fleet at la Bahía de las Animas. The attack started at midnight, it was bloody and the Spanish lost many soldiers. The next day Padilla declared himself triumphant.

On October 10, 1821, the acting Spanish governor, Brigadier Torres y Velasco, handed the city to the Patriots, this time for good.

What To Do in Medellin

Holidays are usually very chill in Medellin. Many stores are closed and people either stay in or go out of town.

If you’re a morning person you may want to jog, run, walk, or ride your bike on the ciclovia.

You may also want to go out and visit a one of the nearby small towns. Just know that traffic will be bad when heading back in the afternoon/evening.

As for me, I usually go to the office and work on some of the fun projects I’ve got going on right now like the Medellin Podcast, or this blog.

Colombia’s independence is long and bloody.  November 11 is an important date because it was a precedent for all independence revolutions throughout South America.  This sense of revolution and bravery that the people of Cartagena displayed earned their city the nickname la “Ciudad Heroica” the “Heroic City.”

Researching Colombia’s independence history has motivated me to go visit Cartagena and learn more about this beautiful country’s rich and sometimes tragic history.  By learning our past we understand our present and avoid pitfalls in the future.

I hope that this blog post has brought you some insight on why we have November 11 off and why it is so important.  This by no means is the complete history, I encourage you to read more and learn more, it’s fascinating. I love Colombian, and Medellin is my home. I like to write and I want to give back to the community. This is the best way I know how. I hope you enjoy my blog!

I started the Medellin Buzz as a resource for my English as a foreign language student. A site where they could read about their city in English, that wasn’t boring. It slowly turned into a personal blog and hub for information for people discovering Medellin. I check comments frequently, so feel free to leave your comment and/or questions below.