The previous year (September 5, 1993), my dad and I had watched Colombia beat Argentina 5 – 0 on their road to the 1994 World Cup. Along with being a day that I, at 13 got drunk for one of the first times in my life, I understood that Colombia had a very special squad.

Monday, June 20th, 1994 was the greatest day of my childhood

It was the day I met the 1994 Colombian World Cup team, including Andres Escobar. 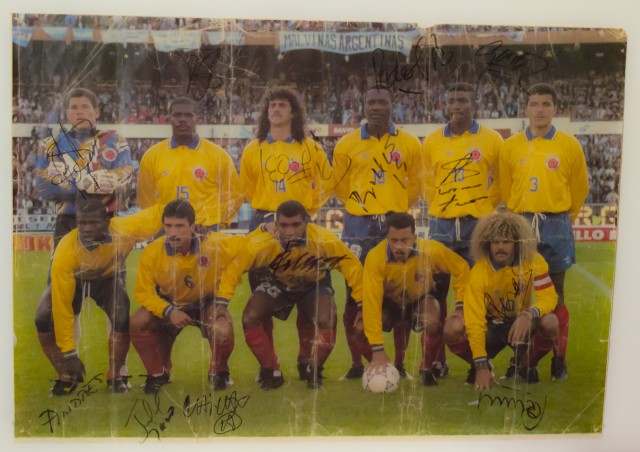 My family and I (I was 13 at the time, mom, dad, sister (11), brother (2), aunt, two cousins, and my grandmother.) made the trip from Orange County to Long Beach, California, to the hotel where the Colombian national team was staying.

There were hundreds of fans waiting for the team bus to arrive from the airport.

I was wearing my Colombian jersey and hat. I had the team poster (image above), a sharpie, and video camera hanging around my neck.

The team bus arrived and the crowd went wild. Security held everyone back and made a hole for them to get off the bus and walk to the lobby. A couple of the players stopped and signed some autographs. I wasn’t able to get to the front. As the last player walked through the hotel doors, I felt deflated.

As I went back to where my family was standing, I noticed my grandma sneaking through the front doors. I couldn’t believe it. She made it into the lobby where all the players were.

So I got my sister and went up to the mountain of a man at the door. With our biggest puppy dog eyes, we proceeded to lie to him.

We told him that our grandmother had walked into the hotel accidentally and that she had dementia (FYI my grandma is 83 now and very healthy…no dementia. Haha.)

The bouncer looked down at us, then looked to his left, then to his right (it seemed like an eternity), grunted and moved aside.

I was able to meet many of the players and get their autographs.

Two days later, we attended the match between Colombia and U.S.A at the sold-out Los Angeles Rose Bowl.

At the time we were living in Mission Viejo, which happened to be the place where the U.S. World Cup team trained.

My best friend and I would ride our bikes to the training facility and watch them practice almost every day (it was summer, so no school). I was also able to meet and get many of their autographs as well. Players like Alexi Lalas, Coby Jones, and Eric Wynalda.

I’ll never forget their last training session. Their first World Cup game was in Michigan against Switzerland, and my father (with my baby brother in one arm) and I went to see them off.

As they were boarding their bus my father called out to Marcelo Balboa, he turned to look at my dad. “Macelo! Duro con esos Suecos!” He exclaimed.

That is one of those moments in life when you realize that your dad is more than just your dad. That he doesn’t just work all day, give you Spanish homework, make dad jokes and listen to salsa in the car, but that he also has heroes and dreams.

I owe many things to my father. My passion for soccer is one of them. I don’t have any children now, but when I do I can only hope to be half the father mine was.

The 2014 World Cup was amazing

In the seven years I’ve lived in Medellin, the 2014 World Cup was the most fun I’ve had. Not only did Colombia go the farthest they’ve ever gone in history, but also my brother and my sister came to visit and the parties that ensued were crazy. This world cup is a bit different. Back in 2014 I was working as a freelancer and was able to take time off to go to watch games at any time.

Colombia plays their first game tomorrow, Tuesday, at 7:00 am. Although I’m sure there will be many people watching at bars or at parks, I’ll be watching it at my local corner store before work.

This is Colombia’s 2018 World Cup Schedule

Where to Watch Colombia play?

However, there are many places around town. Most malls will have big screens showing it. Also, many of the parks around the city will be showing the games.

I personally like watching it at my local corner store with the people from my neighborhood.

Where will you be watching Colombia?